Series of scandals and tougher lending rules prompts £37m loss and talk of brand overhaul at UK’s largest payday lender.
Wonga , Britain’s biggest payday lender, has slumped into the red by £37m and said it is considering changing its name after a series of scandals last year that led to a wider clampdown on payday lenders.
Executive chairman Andy Haste, who joined last July to overhaul the controversial firm and hired a new management team, warned of another year of losses in 2015. “We know it will take time to repair our reputation and gain an accepted place in the financial services industry, but we’re determined to deliver on our plans and serve our customers in the right way.” 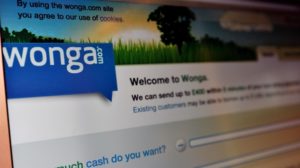 Haste said the future of the Wonga brand was under review – “all of that stuff is in the melting pot. We are not ruling it out or in.” He added: “The question comes down to whether it remains the only brand or one of many brands and ultimately does it stay as a brand for the overall company?” He said there was no rush to change the name, as the firm does not want to be accused of “brand washing”. “It’s hugely important that we generate real change,” he stressed.
In October, the Financial Conduct Authority forced the company to write off £220m of loans to 375,000 customers, who it admitted should never have been given loans. Accused by MPs of “legal loan sharking”, Wonga charged annualised interest rates of up to 5,853% a year and some of the loans ballooned from a few hundred pounds to thousands of pounds. The Church of England branded the company “morally wrong” and pledged to boost credit unions as an alternative to payday lenders.
Now, after a regulatory clampdown on the pay loan industry, the annualised interest rate is capped at 1,500% – which means customers pay £24 interest for £100 borrowed. The average loan is “a few hundred pounds” and is typically taken out for two weeks, Haste said.
Wonga’s results show it made a pretax loss of £37.3m last year against a profit of £39.7m in 2013. Revenues fell 31% to £217.2m, as lending to UK consumers declined 36% to £732m, from £1.1bn in 2013. The firm lost 1m UK customers and now has just under 600,000 borrowers.
It made 2.5m loans in the UK last year against 3.7m in 2013. It expects a further reduction in UK volumes in 2015, the first full year in which it is operating under its new, tightened affordability criteria. Previously, its checks were so poor that loans were granted to people who had no chance of ever repaying the loan, with many living on unemployment or disability benefits.
Tara Kneafsey, the head of Wonga’s UK business who joined from the insurer RSA, said: “We are focusing more on loan to income ratios and on people who are able to pay us back.”
Chief financial officer Paul Miles said there will not be any further write-offs of customer loans, beyond last year’s £35m bill.
As part of the changes, the payday lender is slashing a third of its workforce, 325 jobs, mainly in the UK and Ireland. The move was announced on the same day the Competition and Markets Authority set out new rules to force payday lenders to be clearer about their charges.
Mike O’Connor, chief executive of StepChange Debt Charity said: “The crackdown on the payday loan market is having an effect but we still need to address the fact that many people need financial help. Payday loans can make people’s problems worse and we need alternative ways of meeting the need for credit. More loans are not always the answer… We must to do more to help people on low incomes to save for a rainy day so that they are less likely to need to borrow in emergencies.”
Wonga is looking to launch new products this year and may seek debt funding in 2016 to support the growth of the loan book. While the UK pay loan market is 2.5-3m people, Kneafsey said the firm has identified a bigger market of 13m people who do not have access to mainstream banking.
The company’s UK main default rate has improved to 6.6% from 6.9% as fewer people fell into arrears. Haste said before the changes, 15% of customers were unable to repay their loan on the first day; that figure has now halved.
Based in London, Wonga also provides short-term loans to consumers in South Africa, Poland, Spain and Canada. The UK slowdown has been partially offset by growth in Wonga’s international businesses, including BillPay, which provides payment services to retailers and consumers in Germany, Austria, Switzerland and the Netherlands. Overall, the group had 3.7m customers at the end of 2014.
Wonga hopes to win new customers when it restarts advertising in the UK later this year after suspending it last summer – and the ads will certainly not feature puppets. The company had a TV ad banned last April which was branded “misleading” by the advertising watchdog. In the ad, one of two puppets discussing a Wonga loan suggested that the interest rate of 5,853% was “irrelevant”. The firm cancelled its UK TV ad campaign in July because, it said, it appealed to children, but continued to show similar TV ads in Poland and Spain for a few more months. Haste blamed previous commitments.
The company has also agreed with Newcastle United to remove the Wonga logo from all children’s replica shirts from the 2016-17 season.
Haste said he joined Wonga because he believes “there is a real need and demand for short-term credit”. He added: “It is clear to me that there is an important role in society for such credit providers, but only if they put their customers first and lend responsibly. Regrettably, that has not always been the case at Wonga. The new management team is tackling deep-rooted issues.”
*Source The Guardian