Nearly a third of full-time students run up debts of more than £3,000 on top of their student loans, research suggests.

And one in eight do not expect to ever be able to pay back what they owe, according to a survey of 2,000 students by Money Advice Trust.

The survey illustrates a worrying trend for students and graduates to take on life-changing amounts of debt in order to afford rising housing and living costs on top of tuition fees. 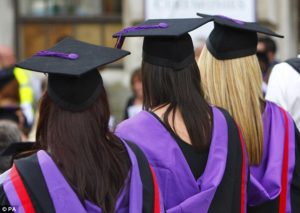 Some 31 per cent of students aged between 18 and 24 years old owe £3,409 on average to banks, credit cards and family and friends.

Some fifteen per cent used their overdraft, which run at an average of £858, while 10 per cent owed money to family and friends, typically just over £7,000. And nine per cent of those in the red had a least a credit card with an average debt of £460, according to the survey.

Having student loans and other debts was a ‘heavy burden’ for one in three students and money in general was a regular worry for half of the students surveyed, with 17 per cent saying that such thought keeps them awake at night.

The MAT said it was concerned the loan systems was ‘normalising’ debt for young people and called on the Government to launch a review into it.

It suggested that student loan payments are made every month, instead of each term, so that students can begin to get used to managing money as if they were in a job and received monthly wages.

The survey also showed that around 40 per cent agreed that managing money had turned out to be harder than they thought, although the majority – 70 per cent – had a budget they aimed to stick to.

Joanna Elson, chief executive of the MAT, said: ‘It is a sad fact that too many students are being weighed down by debt problems.

‘As our research shows, this issue goes beyond student loans – which are a very different kind of debt – to significant proportions of students already holding debts on credit cards, overdrafts and to family and friends.

‘Students can of course generally anticipate higher incomes later in life, but it is essential that any debt problems are tackled early. Practical reforms to student finance payments would help – and we also need universities, students unions and advice charities to work together to do more to raise awareness of the free advice that is available.’

With the sharp increase in student fees, student loan debt has grown from £15billion in 2004 to £86billion as at the end of 2015, according to recent figures by TUC and UNISON.