Families with children who are in debt could be given extra help to seek advice and support under new plans being recommended to the Government. 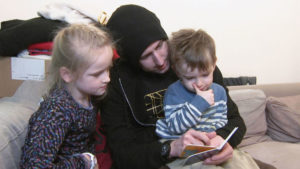 The Families with Children and Young People in Debt (Respite) Bill – put forward by Conservative MP Kelly Tolhurst – will get a second reading later this month.
It hopes to place a duty on public authorities to provide access to related advice, guidance and support to those in debt.
Ms Tolhurst says she hopes the bill will improve the situation for families who are struggling: “The idea of the bill is when people get into debt, they can get debt advice and there are certain agreements and certain debt opportunities that they can work on to reduce the debt, and pay it off.”
She added that the statutory responsibility for public authorities would mean that charges and interest could be frozen while people in debt were helped to create a proper debt plan.
Debt in the UK is an escalating problem and the amount of money that people are borrowing is on the rise.
In December, figures from the Bank of England showed consumer debt stood at nearly £193bn.
In the same month, credit card debt stood at £66.7bn – nearly £2,500 for every household.
Last year, Citizens Advice in England and Wales dealt with 5,939 debt problems every working day.
Mark Waddoup’s debt problem began to get serious when his partner became pregnant.
It was that change in circumstance which meant he struggled with loan repayments, leaving him more than £15,000 in debt.
Mr Waddoup said it was a stressful time, adding: “It was meant to be the happiest time of my life, bringing in a new-born. But it was pretty horrible.
“I was trying to plan to bring the little one into the world, but struggling because I couldn’t afford to get the things we desperately needed like a Moses basket … just simple things.”
Mr Waddoup was helped to manage his debt by StepChange Debt Charity.
Peter Tutton, who works for the charity, said constant demands from creditors could make things worse for people struggling with debt.
He explained: “What people really need is a sense they’ve got some time and space, just to recover control of their finances.
“If you’ve lost a job, also reducing that stress gives people a chance to get another job, or recover from whatever has happened to them.”
*Source sky.com