Philip and Victoria Sherlock live in car on industrial estate near Wrexham after being evicted from home when high interest rates see their debts spiral out of control.

A couple claim they have been forced to live in their car after payday loans sent them spiralling into debt.
Philip and Victoria Sherlock borrowed £830 from lenders to cover their rent after he fell ill and had to give up his physically demanding job.
But high interest rates saw their debts spiral out of control and, despite 32-year-old Mrs Sherlock taking on extra hours at work, they were evicted in February. 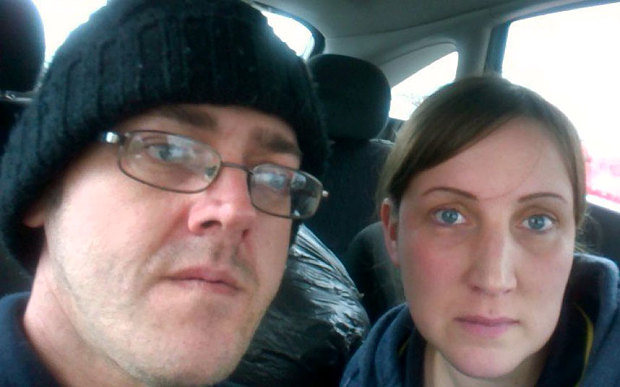 They claimed they asked the council for help, but said they were told they were not considered high risk enough for emergency accommodation.
Mr and Mrs Sherlock now live in their Ford Focus, which they park on an industrial estate – and spent their ninth wedding anniversary sharing a Twix in the car.
Mr Sherlock, a 42-year-old former landscape gardener, said: “I want to provide for my wife and I can’t believe it’s come to this.
“Four months ago I had money and a lovely house, now we live in a car, sleeping in a cold and dangerous estate. It’s a nightmare and an absolute joke – we’re embarrassed to tell everyone the truth.
“We were hoping this was going to be temporary, but we’ve been living this way for a month. As an adult couple who want to work, it’s humiliating how far we’ve fallen.”
Their bad luck started when Mr Sherlock, who had worked for 24 years, had to have an operation on his stomach that was twisted around his gullet in October.
He had to give up his £400-a-week job and started claiming £84 a week in benefits while he tried to find a less physically demanding role.
With £78 a week from Mrs Sherlock’s shop assistant job, the couple from Pontiau, near Wrexham in Wales, tried to survive – but fell behind in bills and rent by December.
In desperation, they sold two double beds, a fridge, washing machine and television on eBay for £600, but then turned to payday loans in January.
Mrs Sherlock managed to increase her working hours to 16 per week, but this meant their benefits were cut to just £62 a week. Within a few months, they were £2,000 in debt and were evicted in February.
Mrs Sherlock said: “We needed quick and easy cash, so we didn’t think twice. But it all got out of control and we ended up with bailiffs at our door.”
They drove 30 miles to Warrington to be close to Mrs Sherlock’s work, but Warrington Borough Council said they were not deemed in need of emergency accommodation.
Mr Sherlock said: “It’s disgusting. I’ve paid my taxes my whole life and this is how they repay me in my time of need? We only took the loans because we were desperate and now we’re snowed under with debt and living in a car.”
At night they park in a local industrial estate and recline the seats of the car to sleep, but they live in fear of being ambushed.
Warrington council said it could not discuss individual cases, but a spokesman said: “If people move to Warrington without securing accommodation first and following an assessment are not classed as being a priority need, we do offer a wide range of support and advice.
“This includes information about private landlords and rented accommodation, loans and bonds, advice and assistance on how to access our services and social housing.
“It refers onto a tenancy workshop so hopefully they can find accommodation as soon as possible.”