Contact Us
A Hull mum says she faces eviction after reaching her benefit cap which then put her behind on her rent.
Candy MacMillan, 29, lives with her five children in Orchard Park in a house she rents from Sanctuary Housing.
She admits she fell behind on the rent by £1,700 in January because she says she did not realise she had hit the cap on her benefits.
Now, after a hearing at Hull Magistrates Court last Wednesday, she says she has been told she has to give the property up. She said: “I’m very upset about it actually. So upset I’ve started having to take antidepressants.
“I have five kids, and we’re all settled with a school just opposite. I don’t know what to do.” 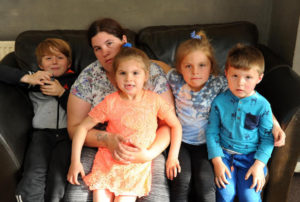 She says she had offered to pay Sanctuary £40 per week as soon as she found out she had fallen into arrears, but Sanctuary wanted more than she could afford.
“They wanted £95 per week, but I just couldn’t afford that, not with five kids,” she said. “But I was paying about £80 a week.
“They said they would take me to court about it, but they adjourned the first hearing because I told him I had applied for Disability Living Allowance (DLA) for my daughter, who is handicapped and has autism and learning difficulties.”
Ms MacMillan said she received notification she was entitled to DLA on Friday, May 12, and received the benefit into her bank account – days after the court issued a possession order on their home – which gives landlords the right to evict if necessary.
She said: “I did call them but they said there’s nothing they can do about it. I did tell them I could pay them £200 a month now, but they said there is nothing they can do.
“It’s the children I am most upset for, they are all settled and this news has really upset them.”
Sanctuary Housing says the note is not an eviction notice, but a possession order, and operations director Daren Nowlan said they want to work with Ms Macmillan to reduce her debt to them and keep her and the family in the property.
He said: “It is the responsibility of all tenants to pay their rent on time. In this case, the tenant has built up significant arrears and as a last resort, we were left with no option but to go to court. The tenant failed to attend and the judge made the decision to grant a possession order for the property.
“This doesn’t mean that the tenant will be evicted, as we have to apply for a further warrant of possession which the court would decide upon, and then she would have an opportunity to apply for a legal stay or to pay the arrears in full.
“During this process we have provided support and advice about benefit entitlement but the outcome of such support has not been communicated to us. We sought to speak to the tenant last week but were unable to make contact and would strongly urge her to contact us as soon as possible so we can work together to try and resolve the situation.”